Shikhar Dhawan’s Team India will take on hosts West Indies in the third and final ODI at the Queen’s Park Oval in Trinidad on Wednesday (July 27). India lead the series 2-0 and will look to whitewash Nicholas Pooran’s side in the ODI series.

India created a world record on Sunday by sealing their 12th consecutive series win in the ODI format against the West Indies — the most against a team.

Notably, rain has stayed away from the first two ODIs of the series and weather conditions were warm and humid. 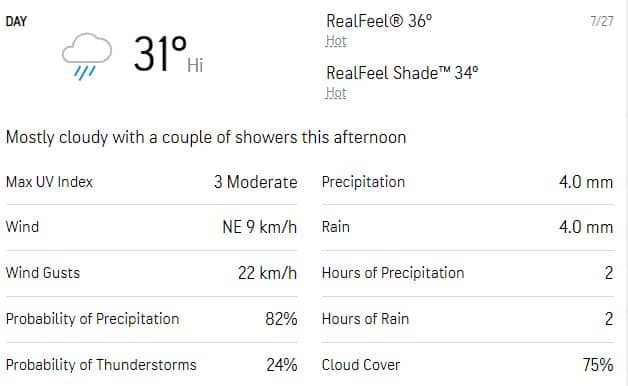 However, the weather for the third and final ODI match seems partially overcast for July 27. The temperature in Port of Spain in Trinidad will be below 30 degrees Celsius and there are almost 66% chances of rain during the match.  The wind speed is expected to be 17 km/h and the rate of precipitation is 1.5 percent. The humidity will be around 75% during the day and rise to 85% at night.

It is worth mentioning that the third ODI is scheduled to start at 9.30 am local time which is 7 pm IST.

Meanwhile, West Indies are currently on an eight-match losing streak in ODIs, including conceding the ongoing series to India. But their skipper Nicholas Pooran insisted that his team is ready to come out and put their hearts, souls on the field to perform as a unit.

With the series already won by India, West Indies will be aiming to end the three-match affair on a high by winning the final ODI at Queen’s Park Oval on Wednesday. “The confidence level is there. The guys are obviously hurt. Those two losses obviously hurt us a lot but there is another game and that’s another experience and another opportunity for us to learn.”

“This game keeps teaching us different things and I’m just happy that we’ve had that experience. It’s difficult to obviously lose, I’m disappointed, but that’s where the learning takes place and as a group we understand that and we know that for a fact that it’s our time now.

“I keep telling winning and losing is contagious and at the moment in ODI cricket we’re losing and we’re finding ways to lose games, but in terms of the confidence level, all the guys are ready for the challenge again. We’re ready to come out there and put our hearts and souls out there and perform together as a team,” said Pooran ahead of the match.