India clinched their 2nd medal in Commonwealth Games 2022 on Day 2 of the mega event in Birmingham when weightlifter Gururaja Poojary won bronze in men’s 61 kg event. This is India’s second medal in the sport while the first one being of Sanket Sargar who clinched a silver in men’s 55 kg category.

Gururaja Poojary is a silver medallist from Commonwealth Games 2018 which were held in Gold Coast. He hails from Udupi in Karnataka in India and trains at the National Insitute of Sports in Patiala. He is coached by Vijay Sharma. Gururaja started Weightlifting during his college days in the year 2010. In the year 2015, he joined the Air Force. He was on boarded in the Indian National Camp in 2016. 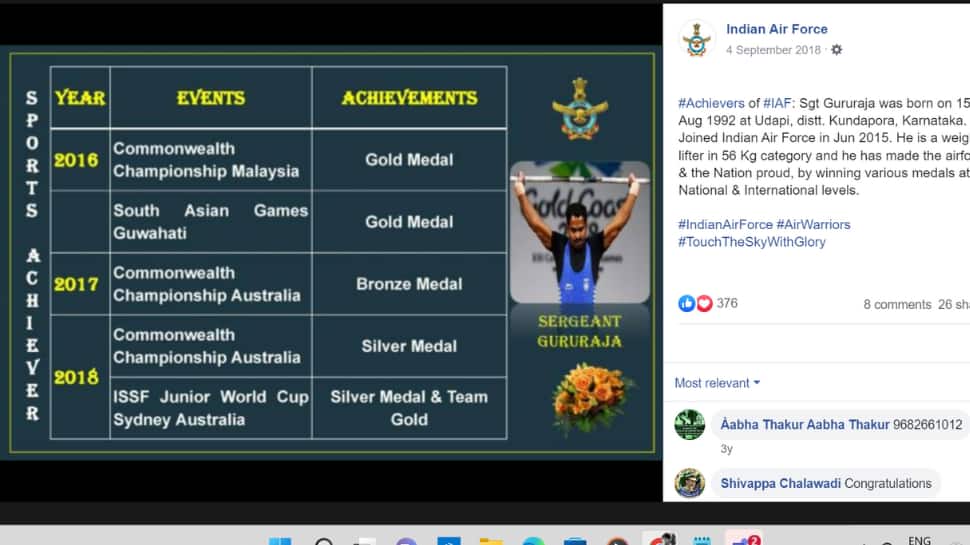 You will be pleasantly surprised to know that Gururaja was inspiration of Sanket who clinched his first medal at CWG 2022, also India’s fist in this mega event. Sanket was just 17 when he watched Gururaja lift big to win a silver medal at the CWG 2018. That lift and win inspired Sanket to take up weightlifting.

Sanket earlier used to help his father run his Paan shop in Sangli in Maharashtra, from where he belongs. When he watched Gururaja and other lifters play in CWG 2018 in Australia, he told himself ‘agli baar mai jaunga hi jaunga’.

This is a profile on Gururaja but it its important to understand how he inspired a 17-year-old to take up the sport and excel at it as well.

Not to forget, Gururaja started out as a wrestler before switching to power lifting and then weightlifting.

He started weightlifting in 2010 but his first major medal came in 2017, at Commonwealth Championship wher where he won a bronze medal in Australia. Gururaj has also won a Commonwealth senior weightlifting championship, lifting a personal best of 249 kg (108+141) in Penang in 2016.